on September 14, 2011
Hey there!  Usually I write the "Linz Quote of the Day" on my Facebook status so I'll be sure to remember them later on.  She does come up with some doozies!  I think often about putting them all in a book like people have suggested but I honestly wouldn't know how to go about making that a reality.
Anyway....today's "Linz Q of the D" ...as I like to call them...started my day off with a great laugh and a smile.  I hope it makes your day a little brighter too. 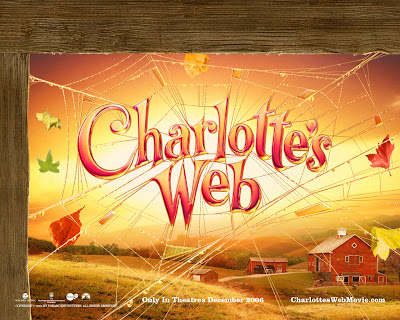 This morning I was in the family room putting my shoes on....sending a quick email ....and getting ready to leave for school/work.  I opened the sliding glass door next to where I was sitting so Marley could go out one more time and it was such a beautiful morning....I left the door open while I finished up.  Linz came in and she walked out on the deck.  Now if you don't know by now...Linz has great conversations....with herself.  She mumbles a lot sometimes.  So I heard her talking to herself out there on the deck and then she looked back towards the house and said, "Mom!!!  Charlotte built a web by the door!  Oh my gosh!"  I did what all moms do....I gave the standard, "Wow....mmm hmmm....oh cool!" response.  Then she said, "Well....she didn't make a magnum opus though.  That's Latin for "egg sack"."  I laughed and said, "I know.  I remember that from the movie".  So she walked around talking about how cool it was....how all the farm animals would be so excited etc.  (Trust me...you had to be there)  So I was finally ready to go and I told her to come on in and lock the slider because we were leaving.  So on our way out of the house I said, "So....was there a message in the web???"  She looked at me like I was crazy (oops....guess I went too far?)  and said, "Mom!  We don't even have a PIG!".  I seriously laughed out loud! 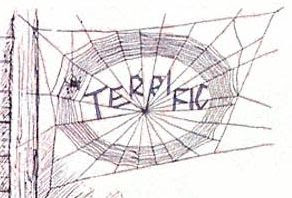 I called Mike on my way to work and told him about it and he just cracked up.  He said he wished we could find a fake spider web that has the words "Some Dog" woven into it.  HAHAHAHAHA!  That would be hilarious!
So....I hope you're smiling.  I just LOVE that girl!
Linz Quote of the Day