on June 02, 2011
Hooray for today! Hooray....Hooray....HOORAY!!
Today the last cast came off!  I know...you know that already because it's all I talk about lately.
I know there are people with REAL problems...people who are REALLY suffering.....and I know I'm just a whiner....  Sorry.
But today...sitting in the casting room with Mom...feeling the last parts and pieces of that cast come off and feel my leg just out in the open again was honestly exhilarating!  No lie.
My favorite casting guy was there and he was all smiles when he saw how I had decorated the cast.  He said, "Now I have to tell you that in the 20+ years I've been doing this...THIS is the coolest and most creative cast I've every seen!!".  Then he got out the trusty saw! 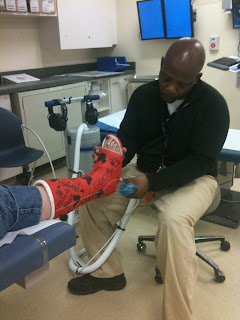 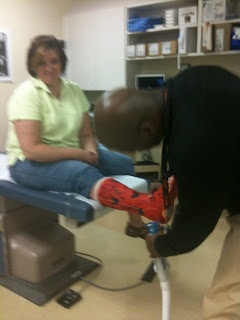 I had forgotten how much other "stuff" was under there....It only took a few minutes but layer by layer he got it all off.
And then....VOILA!  My leg was freeeeeee! 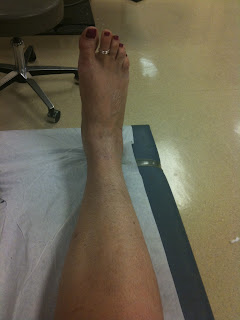 I'll spare you the close up.....It's is NOT a pretty sight.  Ugh.  I don't even like looking at it.
The Dr. G came in and took into the imaging room for a scan and things are mending nicely.  He showed me where he'd taken bone from on my heel to build up the fractured spot....and he told me a lot more than I really needed wanted to know!  Kinda made me nauseous.  Grrrrross!
He said that I have to remain "non-weight bearing" for two more weeks but with the removable cast (boot) I can take it off to shower and to do the exercises he showed me.  He took off the dressing from my incision and said it looks "great".....um, ok.....if you say so.  Blech
Hopefully when I go back in two weeks I will be able to start walking on it.  He sounded very hopeful.  YAY!
So....that's the news from here.  Thanks for all your prayers...and cards....and emails....and the "Meals on Wheels".  You have blessed me and our family more than you can imagine.
Much love to you and yours,
Michelle
cast foot surgery