The Cat in the Hat and Zach

I know there are a few of you have mentioned that you enjoy reading the "Linz Quote of the Day" that I post on my Facebook status sometimes.  Well, this one took a little more background and it was just too long for that pesky little status box.  Also, I wanted to write it down so that I can actually remember it!  If you dropped by just for the quote....scroll down to the bottom.  :-)

Linz and Zach have a very unique relationship to say the least.  My mom will tell you that they even seem to have their own unspoken language.  Just a look between them can mean so many things.  It's awesome to watch.

Every morning they get up for school all on their own without us going in to wake them up.  That may not seem like a big deal but Linz NEVER sets an alarm clock to wake up.  But every morning at 6 a.m. sharp her light comes on, we hear her feet hit the floor and 10 minutes later....POOF...she emerges from her room ready to head down for breakfast.  I'm not sure HOW she does it....she just does.

Zach usually gets up on his own too.  I think he actually hears Linz and figures he'd best get a move on.  I used to help him pick out his clothes just to make sure he "matched", etc. (that's important you know!)  Anyway, he owns lot of tshirts with animated characters on them.  Needless to say...a lot of them are Disney characters.  (SHOCKER...I know!)  He LOVES them but I was trying to help him "blend in" a bit in high school and wear things that were a little more grown up and stylish.  Believe me....I had to sneak into his room under cover of darkness to remove the green Tigger tshirt that had been well worn, well loved and had started looking like more of a "belly shirt" if you know what I mean.

Ok...fast forward to the present.   Within the last year or so Zach has started to show a real preference for the color red.  We've been out shopping at WalMart, Target or Aeropostale and I'll show him a few "mom approved" styles and nine times out of ten he picks whichever ones come in red.

So my parents bought Zach a few new shirts for his birthday recently.  I had mentioned to my mom that Zach had stopped to look at a rugby shirt in a store a few weeks back and I'd asked him if he liked it and he'd simply said, "Yes".  She and my dad, being the awesome Nannie and Papa that they are, were then on a mission to find him rugby shirts.  They found them and even found one with red and white stripes.  He loves the ones he got from them.

This morning Zach got up and got dressed and headed downstairs while I was in the shower.  He brushed his teeth and shaved.  (Don't panic....he has an electric shaver).  He put on his jacket....being careful to zip it ALL the way up to his chin (another battle I've given up on).  He put on his Osbourn baseball hat.  He put on his backpack and sat on the couch to wait for the bus.  I try very hard to make sure that I do a "spot check" on the outfit etc. before he leaves for school....just in case, ya know.

I called down the stairs to him and asked him to come up and see me so I could get a hug before he left.  Sneaky, right?  He came upstairs and I said, "Oh! You look so nice!  What shirt do you have on under that jacket?"  He looked and me....looked at himself and then back at me and said, "The Cat in the Hat".  So my mind starts racing trying to remember when I'd bought him a Cat in the Hat shirt and IF I did....what does it look like.....does it still fit.....THE BUS IS COMING SOON!!!  Ugh!  Nope.  Can't remember it.  So I ask him to let me see it.  He unzipped his jacket and there's that nice, new red and white rugby shirt!  WHEW!

I started to laugh and said, "Wow Zach!  Great job!  You're right.  It DOES look like the Cat in the Hat!"  Then I hear Linz from downstairs say to me, "It's okay, Mom.  He's just autistic you know."

Because he doesn't talk very often I'm sometimes taken aback by the sound of his voice.  Don't ask me why.  It's just something that most people take for granted I guess.....hearing your child's voice.  We can't have conversations.  He can't come home from school and tell me what he did that day.  He can't tell me all the high school drama.  He can't tell me when he doesn't feel well...I have to guess.  What he CAN do though is put his very long arms around my head (because he's so blasted tall and I only come up to under his chin) and give me the best hugs imaginable.  He can beat ANY video game out there.  He can light up the room with his smile and the most important thing he can do....he can and does make my heart sing when I tell him I love him and he says, "I love you too, Mom".  Ahhh....music to my ears.

So there are the "Linz and Zach Quotes of the Day". 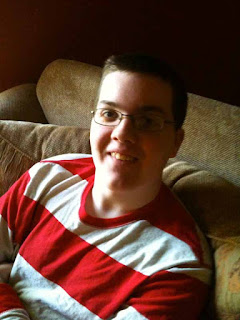